Bangladesh's breakout year in one-day cricket has earned them a place in the ICC Champions Trophy for the first time since 2006, the International Cricket Council confirmed on Wednesday. 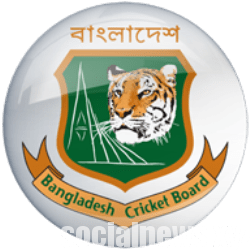 Bangladesh has replaced the West Indies among the eight sides to contest the 2017 tournament, which will be played in England, reported cricket.com.au.

An excellent show in the World Cup earlier this year saw Bangladesh defeat England to advance to the quarter-finals. Since, they have won One-Day International series against Pakistan, India and South Africa, helping them jump from ninth to seventh in the ICC's ODI rankings.

Pakistan were ranked ninth earlier this year and faced the genuine prospect of missing the Champions Trophy tournament, but were saved after winning series against Zimbabwe and Sri Lanka.

The West Indies have not played a one-day match since the World Cup, with a lack of matches denying them a chance to rise up the rankings, with September 30 the cut-off date for qualification.

The news is a further blow to West Indies, who suspended coach Phil Simmons for next month's tour of Sri Lanka earlier this week after he publicly questioned the make-up of the ODI squad.

The last time Bangladesh played in the Champions Trophy, they featured in the qualifying round of the tournament -- which included 10 teams. They lose to Sri Lanka (by 37 runs) and the West Indies (by 10 wickets), but defeated Zimbabwe by 101 runs.

The 2017 Champions Trophy will be a 15-match tournament, with teams split into two groups of four.

The top two teams in each group will advance to the semi-finals.

The ICC also confirmed the cut-off date for direct qualification to the 2019 World Cup, also to be held in England.

The top eight ranked sides in the ODI rankings on September 30, 2017, will automatically qualify for the tournament.

The teams ranked 9-12 will have a second chance to qualify, playing off against other associate sides for the final two places in the 10-team tournament.